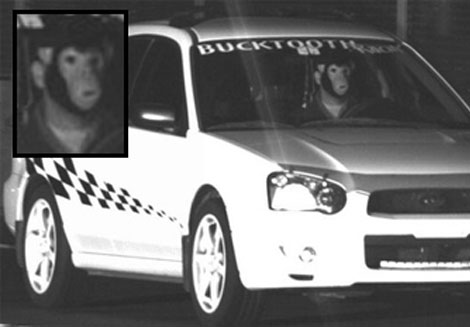 Press Writer Fri Sep 11, 9:22 pm ET PHOENIX – A driver has racked up dozens of speeding tickets in photo-radar zones on Phoenix-area freeways while sporting monkey and giraffe masks, and is fighting everyone by claiming the costumes make it impossible for authorities to prove he was behind the wheel. “You’ve got to identify the driver, and if you can’t it’s not a valid ticket,” said Dave VonTesmar, a 47-year-old flight attendant said.

It took Arizona state police months to realize the same driver was involved and was refusing to pay the fines. By the time they did, more than 50 of the tickets had become invalid because the deadline for prosecution had passed.

Authorities have since stepped up their efforts to ensure that VonTesmar pays his $6,700 in fines.

On Aug. 19, the Arizona Department of Public Safety served VonTesmar in person with 37 tickets, mostly between 11 and 15 mph over the speed limit. The pictures accompanying the tickets show a driver wearing either a monkey or giraffe masks in VonTesmar’s white Subaru, which has black-and-white checkered racing stickers on its sides and a sticker on the windshield that reads “Bucktooth Racin’.”

Agency spokesman Bart Graves also said authorities have surveillance photos of VonTesmar putting on masks before driving and believes that they will convince justice court judges in three area cities that he was the one behind the wheel and must pay his tickets.

“We have pretty strong evidence against him,” Graves said. “We’re just asking for his fines to be paid.”

Graves said VonTesmar has repeatedly endangered public safety and that the agency is taking his case very seriously.

VonTesmar, who said he simply drives with the flow of traffic, said if the Department of Public Safety does have surveillance photos of him on the road, it proves he’s not a danger to other drivers. If he were, officers would have pulled him over, he said.

Arizona began deploying the stationary and mobile cameras on state highways a year ago, and through Sept. 4 had issued more than 497,000 tickets. Of those, about 132,000 recipients had paid the fine of $165 plus a 10 percent penalty, netting the state more than $23 million. Arizona is the first to deploy such technology on highways statewide.

Many of the remaining tickets are either new, being appealed or have just been ignored. The state didn’t have figures immediately available on the breakdown.

The backlash against the cameras has been fairly constant, however. Arizonans have used sticky notes, Silly String and even a pickax to sabotage the cameras.

Many believe the shooting death of speed-enforcement van operator Doug Georgianni on April 19 on a Phoenix freeway was a result of anger over the cameras, although authorities haven’t made that direct allegation. Three separate citizens groups are targeting the cameras in initiatives for the 2010 ballot. Shawn Dow, chairman of the Arizona Citizens Against Photo Radar, said he’s not sure whether VonTesmar has affected their cause.

“It is very funny,” he said. “In one sense it shows how silly this whole thing is, so you know I’m glad he’s using a sense of humor. The fact that he did it 90 times, I don’t want to drive around the guy.”

Dow said he finds it interesting that DPS conducted surveillance on VonTesmar.

“They’re out staking out a guy with a monkey mask?” he said. “They watched him break the law and didn’t do anything about it? If they had pulled him over, they could have pulled the mask off. It just proves photo radar is not about safety, it’s about money.”

Officials say the photo-enforcement program is designed to slow drivers down and keep the roads safer. But VonTesmar sees it a different way.

“It’s a peaceful act of resistance — that’s what this country was founded on,” VonTesmar said. “I’m not thumbing my nose at DPS, but photo radar is not a DPS officer protecting public safety. It’s nothing but a speed tax.”